If trauma is untransformable experience, then any … belief [or] theory … that is simply abided by rather than personally transformed is akin to trauma.

On a hot day, one of few this summer, small frogs sit at eye-level in the cucumbers and sparkle-stemmed tomato vines. They’re after whiteflies, tiny insects that appear in increasing numbers as the season progresses and crowd the undersides of leaves to feed on sap then erupt outwards like animated dandruff if their leaf is touched. As the heat intensifies, snakes and lizards disappear into whatever cool seclusion they can find. Small birds – thornbills, wrens, fantails – arrive all at once to drink and bathe in a garden water pot.

Later, rain comes and goes as a thickening of fog off the sea and in it, wattlebirds talk. The pohutukawa tree has finished flowering but still the birds fly in to check – there’s not much else around. Garden grevilleas power on but I haven’t seen any eucalypt blossom despite the wet; maybe the days haven’t been hot enough to promise the fire their seeds need for germination. There’s a heavy crop of hawthorn berries but almost no elderberries and all summer the elder trees have looked stressed, their leaves sparse and sickly.

In steamy rainlight I seek the shade of forest to the west of the house. Near the ridge, uplifted by magma from below, a layer of mudstone sends a scatter of chunks downslope, brown-grey splashed white by lichen, honey-coloured where it’s newly split. Bedrock, oldest, laid down in a shallow, icy sea between 250 million and 300 million years ago before the breakup of Gondwanaland, the rock is crowded with fossil casts – lacy fans of moss-animal colonies, grooved shells of bryozoa, snail spirals and bivalve molluscs – and scattered through it, dropstones from the ice under which they all lived.

In the fragrance of regrowth stringybark and whitegum and its understorey of sticky wattle and satinwood, I follow the track downhill toward the river. Downslope from the mudstone scree, sheets and boulders and rounded cobbles of sandstone weather through – though laid down later, uplift has tilted the layers so that the sandstone emerges lower down the hillside than the mudstone, seeming to reverse this timeline. 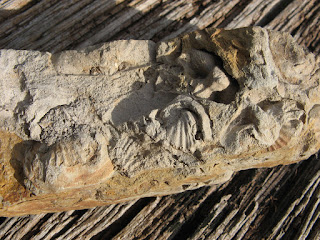 Still thinking about the sentience of the ground, the mineral intelligences that give rise to life – their affects and ours in exchange with one another whether in the spaces of a forest or the built environment of the city. The qualities of these stones that become our ancestors, offering sustenance and affliction according to how we interact with them over tens of generations.

Once, travelling in the southwest of Ireland where my mother’s people came from, I had a dream out of the limestone bedrock there. In the dream, I encounter a human figure, alive but encased in white mortar, a hardened shell that looks as if it’s been poured on, so that only the outline of the body can be seen, arms fused to its sides, legs fused together. The shape reminds me of the pebble figures people have made for hundreds of thousands of years1 – earth-as-human or human-as-earth telluromorphs, prompting and storing and responding to the names, the meanings we give them; house and spirit, both.

In my dream, though, stone is not understood as being imbued with spirit, inseparable from it. Instead, the figure has been created as a prison where spirit is trapped by those who fear it and also desire to control and exploit it. Emerging from and into the imaginal realm that is myself-in-Ireland, as an image of an inherited attitude to land – so far, so familiar. But dreams don’t come to tell us what we already know and here’s the new thing I’m given to understand – the land has an attitude to me; the creature returns my gaze with a look that is completely sane, full of power. Country looks back at me; used and used up, used against itself in that landscape stripped back and scraped to the bone by non-human as well as human forces – but still utterly alive, waiting for response.

Jittery thoughts veer and bunch and scatter, reflecting light this way and that like the whistling flocks of starlings, this year’s young, that drop in dark-shining clouds to feed on insects and grass seeds and ripening blackberries, then launch themselves once more with a sound like a single, indrawn breath. Their intricate, shapeshifting formations look like exuberance and also anticipate those moments when the flock cleaves around a hunting falcon.

I keep a chunk of mudstone on a windowsill, along with a piece of the magma that pushed up under it – grey-green sanidine porphyry full of feldspar crystals, this piece just now dislodged by the grader from its setting in the 19th century macadam of the roadbed. The ground here is delicate; treated carelessly it erodes quickly to bare clay, washes into undermines that grow in a year or two from leg-breaker potholes to gullies that can swallow half an acre of cleared land at a gulp. But it’s rich too, and generous when respected.

Cutting grass is in flower, delicately fragrant; in damp spots along the dry creek-bed it lifts its chestnut-coloured plumes with their creamy, tonguelike stamens. Tiny jewel-bright coprosma berries are ripe, the prickly bushes twined through here and there with purple apple-berry vines – silvereyes hang among the twigs to eat and parrots pick fallen fruit from the ground. Pademelons graze clearings along the forest edge where pink heath makes buds ahead of winter. 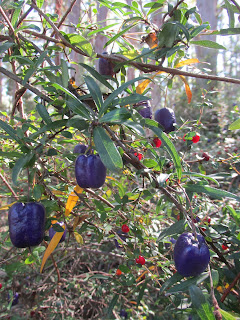 The part of my inheritance that I have to recover from most urgently – the received belief that the world is a broken machine, that I’m separate from it, that I must do to it in order to fix it. When truly, everything is alive and looking – itself in me and I in it. Together we can have ideas.

1 For example the Venus of Tan Tan, a quartzite pebble found near a scatter of stone tools in a layer of river gravel dated at 300,000 to 500,000 years in Morocco. About six centimetres long and two and a half centimetres wide, the stone has, as part of its original formation, longitudinal and horizontal grooves that create the effect of a human figure with arms fixed to its sides and legs joined together. Some of the grooves have been deliberately deepened and there are traces of ochre on the stone. See Robert G. Bednarik. ‘A figurine from the African Acheulian.’ Current Anthropology 44.3 (June 2003): 405–13.