“I told you a lie,” said Finegas to Fionn. “The Salmon of Knowledge was to be caught by me
according to the prophecy, it’s true, but it was not to be eaten by me.
It was given to you, dear son. Let you now eat up the fish.”
The Boyhood of Fionn
Birds give the danger-on-the-ground alarm and I see a quoll with an injured leg go limping through the garden, not bothering to stay under cover though it’s broad daylight. It’s a big male, worn out by two or maybe three years of fighting and mating; I know as soon as I see him that he’s looking for a place to die. But first he wants water. He goes to the little pool where a pot overflows into a rock hollow, easy to reach, secluded. Next day I hear ravens close to the house, on the ground where they never come, calling Strange! What’s that? and we find the quoll curled beside the water where he lay down after one last sweet mouthful. Close by, the clean bones of another quoll, almost certainly his forebear, who a few years ago also chose this spot to go back in.

Early in the morning I count fifty, sixty, seventy black cockatoos, some of them flying so low I can almost touch them as they pass slowly overhead from the west in twos and threes and fives, crying back and forth to one another, marking the pale sky with their pivoting, droop-winged flight. My heart leaps up as those nearest turn their heads my way and I call my praise and happiness – I hear you! I see you, beautiful! Though there have been groups coming and going all year and a small clan roosts most nights in the pine windbreak near the house, this is the first time I’ve seen the flocks aggregate for winter since before the 2019 fires that burned tens of thousands of hectares of their local forest habitat. I thought many must have been killed or have lost their feeding grounds and nesting trees. But they’ve made it through two years. And in fact there may be rich pickings, temporarily at least, in fire damaged trees now vulnerable to attack by wood-boring insect larvae on which the cockatoos love to feed, tearing into bark and timber, each beakful coming away with a sound like a cork being pulled, to reach fat grubs.
Next day the whole flock is dispersed downhill though the trees along the sides of the dry creek as if they’ve roosted there. Families of black-headed honeyeaters feed and call high in the canopy and olive whistlers, scarlet robins, a pair of grey shrike thrushes, overwintering fantails move around through the understorey. Eyes and ears of place. There’s still enough residual warmth in the ground for fungi – tiny yellow fingers of Calocera and translucent white folds of Tremella sprout from rotting wood; purple boletes and pink and red and orange-brown mushrooms, some of them enthusiastically eaten by bettongs and potoroos and pademelons to judge by the toothmarks, keep appearing under the eucalypts, and under the pines there are scarlet amanita and ochre-coloured slippery jacks. 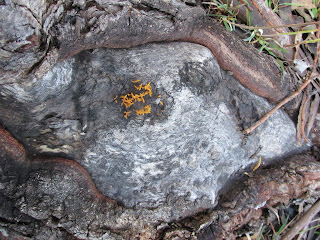 The first eclipse of the year dims and reddens the full moon as earth moves between it and the sun. In vedic stories about eclipses, the severed head of a demon who steals immortality from the gods is thrown into the sky, and there it lies in wait to eat the sun and moon when cyclically they come within its reach. Devouring, insatiable because cut off from bodily awareness, it swallows the light but can’t retain it. The image stays with me because just now, again, in Gaza hundreds die under bombardment, their lives snuffed out to bolster the standing of a failing politician. Six hospitals hit. Boys answer live ammunition with stones. And then a truce, till next time. The prizes our ancestors seized catch in our throats: It was given to you, dear son. Let you now eat.
On a clear day, cool and still, I go walking with N along a track that winds east and south to a low summit looking out along the river to the sea, among smooth-barked eucalypts whose trunks shine cream and grey and green. Tree frogs send their creaking calls from clumps of sword-sedge, and honeyeaters feed and talk in the shrubby groundcover of cheeseberry and peaflower. The river, seen in glimpses through the trees and then more fully as we climb higher, is blue silk. Its expanse is populated by the round black plastic pens and feeding and processing platforms of salmon and ocean trout farms that have proliferated here in the last thirty years. What does the river think as it tastes these fish, their diseases of confinement and the pharmaceuticals used to treat them? Each pen pours effluent into the stream equivalent to the output of a small town. As we reach the top of the hill, across the valley a helicopter drops incendiaries around the edges of several clearfelled logging coupes. Smoke goes up in wisps that quickly thicken to columns topped by pyrocumulus clouds. How does the personhood of the valley receive those fires, intense enough to kill the soil biome and seedstocks? A selected eucalypt monoculture will be sown in the warm ashes and insecticides sprayed to protect seedlings from the caterpillars they attract.
Still thinking about knowledge – what it is and for whom, and how clumsily we use what we acquire. We think of ways to have more of the beautiful fish; we understand the marvellous utility of certain types of timber and that eucalypt seeds need smoke and the right amount of heat to germinate.
As the cockatoos foretold by their flight down out of the mountains, temperatures drop. Cold grey days of rain and sleet lift now and then on snowy tops before cloud lowers on the next squall. The wind is bitter, southerly, blowing from storms the size of Australia that move across the Southern Ocean. The pear trees in the paddock have dropped their leaves and now hold up the sharp promise of next year’s buds. Intricate ochre and brown leaf silhouettes pattern the ground under the hawthorns; the apples and chestnuts fling down gold and the little medlar drops an orange flounce around itself. Soon the wintersweet will send out its drifts of cold perfume. 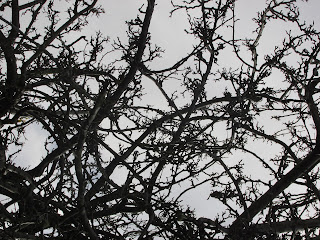 Sleepwalking, we continue our predecessors’ quests, abiding by [them] rather than personally transform[ing] them, as Adam Phillips puts it, describing unquestioning belief as akin to trauma. Can we renegotiate the longings, prophecies, enmities, styles of thought – about plenty, about nationhood – that choke or burn everything they overshadow? Confined by ideology, by algorithm, wisdom sickens, dwindles to data, tastes of ashes. We are the river we fill with junk; we are the nuked soil. We are the soldier and the bombed child. And for most of our time here, humans have known it – and known that living and dying well depend on taking our place in a shifting exchange of care with all that is, seen and unseen.
Hope comes round again; the disembodied head can’t hold for very long what it devours. In darkness, by touch, we learn the gullet of the beast and spit ourselves out once more into starlight.
References
Adam Phillips. Attention Seeking. UK: Penguin, 2019. 26.
James Stephens. Irish Fairy Tales (1920). New York: Dover Publications, 1996.