July 31, 2021
my eyes are listening
octaves inside the landscape echoes
building earth sky each creature the shape
of a passion ranged along lines that
set me humming the way a voice rings metal
double rainbow singing through hear it?
we might be
anywhere in the scale

dropping from nowhere
the young hawk
practises arpeggios
on the wind 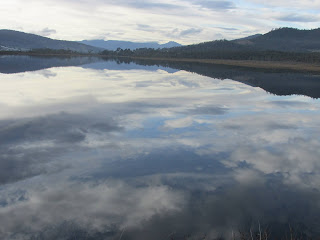 Just as the days begin to lengthen, a week of clear skies brings frost that lies all day in shady places and builds on itself night by night. Thin films of ice form on garden water pots and on the little shadowed dam to the west of the house but birds still come to bathe. Currawongs that weigh in at half a kilo and 10 gram fluffballs like fairywrens, more than ever now they all need the insulation of clean feathers.
Breath-clouds halo our heads when we step outside; in the morning, the dog spins in circles, delighted, and snaps up mouthfuls of frosty grass to toss around as if it were snow. Cows lie steaming and chewing cud, bodies aligned like solar panels towards the brightness and faint warmth of our star.
All night the river breathes fog that laps the lower slopes of the valley and at sunrise begins to lift through forest and over pastures till it clears the ridges. It closes over our heads as we walk downslope and in its dimness, trees loom strangely and the space of the understorey is transformed to a minutely beaded matrix of spiderwebs so fine they’re invisible without this delineation by moisture. New colours and shapes of fungi elaborate themselves on rotting wood in the grey damp. 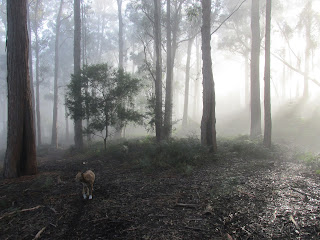 For the first time since the start of the pandemic, we all get streaming head colds. Last winter everyone was so withdrawn from outside contact that the ordinary contagions didn’t circulate, but this year we’ve moved about more freely here on the island. The disjunction with experiences of chaos in other places and with mainland states as they go into and out of hard lockdown adds itself to my sense of dis-ease.
Fretful, turning inward, I remember how almost every winter as a child I got bronchitis and would be allowed a few days in bed-heaven, reading. The taste of hot lemon-and-honey, and if I was feverish, the sour-bitter sickliness of a half-aspirin squashed into a spoonful of jam, swallowed with a shudder. My mother’s hands on my cheeks and forehead. And one year when fever stretched me thinner and thinner, those hands bringing the pure cool mercy of cucumber, laid in long slices from temple to burning temple, my hallucination interrupted. And as each slice grew hot on my skin, hands going and coming with fresh pieces left to chill on the frosty windowsill.
Sickness leaves me grainy, permeable. Lives and deaths, caresses and blows echo through me like bells, and everything brightens and dims with the coming and going of breath. My lungs are continuous with the air of the world and together we breathe a contagion of all that is – terror and generosity of the universe drifting through, every war fought in me, every peace declared, the whole world stretched or in spasm in my muscles, bathed in the light of cells dividing, moving their cargoes, dying and renewing.
Now the stillness of frost is broken and turbulence comes as huge weather systems pull freezing air from Antarctica as far as the mainland. Clockwise-turning entities so big that their edges break on the island from the northwest, they bring snow but also draw down warmer air from the landmass to the north, so that mountains across the valley appear and disappear, white, then rainwashed, then white again. At full moon, low pressure and strong winds combine with the augmented tidal pull to submerge jetties and flood the road that runs along the river.
In the wind, little flocks of starlings whistle sideways across paddocks and over hedges where tight-packed buds of elder leaves and blossom are beginning to splay. The dog resigns herself to only one walk and throws herself into sleep beside the fire. Sharp gusts slap bare twigs of roses and flowering wintersweet till they screak like fingernails against the window glass.
The wintry mood seems underlined by groups of ravens that gather each day at first light to announce the moveable feast of the night’s roadkill, now a main food source while insects and fruit are scarce. Driving, I round a curve and surprise a white goshawk feeding on a pademelon carcass – the bird manages to unhook its talons and lift away but many are killed like this, caught in their own death grip. I stop and heave the wallaby far to the side so that the hawk and other creatures can eat in peace.
For other birds, food is scarce but even so, in this unpromising moment many prepare for nesting. Pairs of scarlet robins pounce from fence wires on insects overwintering in ragged grasses. Plovers scuttle, low to the ground, away from chosen nest sites. Grey currawongs chase and squabble over the small red fruits of cranberry heath. All this at the signal of lengthening days as first flowers start to open on silver wattles and prickly wattles, testing the air. 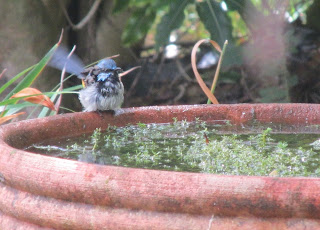 Parma violets make flowers. Bulb shoots – little glaucous leaves of galanthus and dark green of narcissus push through the sodden earth of garden beds, weeks later here on the ridge than those growing a couple of hundred metres down the hill in the town, at sea level. Grass grows through the clumps in soil too wet to weed and dead stalks of last year’s perennials lean broken in the rain.
In the dark of sickness where ordinary perceptions fade, I feel my mother’s hands all though the things I do, and the hands and breath of everyone who came before me, down along lines of blood and affinity and enmity and out across the layered intensities of place. And maybe that’s how it is – our dull or listening hands are what we pass along, what we offer into the world that breathes and touches in return, offering healing, waiting for us to hear.