Promptly, at the start of the month the swallows arrive and begin to fly in and out of the sheds, checking old nest sites and looking for new ones. We have one warm day and I prepare for the turn to fire-vigilance, though I know we still have a time of grace because the ground is so wet. A prickle of green appears on some of the hawthorns. Then for weeks it rains and rains; squalls pass over on the hour and in between the sun shines briefly, hot.

The ground is sodden underfoot in a miraculous reversal of recent years when fires were already well under way at this time. They’ll be back, but any reprieve is welcome. The wind blows bitterly cold off heavy snow on the peaks across the river and newborn animals that have been tipped headfirst into it hop about, bellies full of the fire of their mothers’ milk.

I’m making sauerkraut with the last of the winter cabbages, adding carrot and ginger along with the salt, pressing the shredded mix into crocks, tucking a whole leaf over the top and weighing it down so that juice covers all, then filling the groove around the rim of the crock with water so that the lid makes an airlock. T is putting in seeds of summer vegetables and wondering if it’s too early to plant out tomato seedlings in the polytunnel.

The day I hear the first cuckoo, a cold wind rakes the sunlight, snowclouds raise feathered flags over the mountains and in the night, out of a starry sky, gusts fall on the house with a sound like kettle drums. In the early hours of the morning the wind drops and at first light, ravens gather – more than a hundred, they settle and lift and reel around the uplifted branches of a dead tree just downslope. Flying or alighted they speak – one orates while others are silent, or they answer singly or talk all at once over one another. And they call to outsiders – heckling the eagles, directing one or two warning barks at the brown falcon as it leaves its nest in the pines and speeds cackling overhead to hunt. 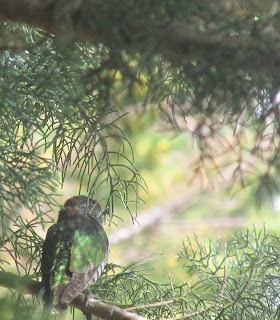 Every day the light opens further and now the equinox is here. Every morning, earlier and earlier, the wild circle of birdsong, blackbirds the matrix through which the others sound – wrens close to my window, wattlebirds and other honeyeaters further out among the trees, and from blackberry thickets along the fenceline, the almost inaudible weet weet of firetail finches, who always sound to me as if they’re singing under their breath. Then, sooner or later, the ravens again, convening in treetops or flying in urgent twos and threes, out and back and over, the planes of their backs and wings obsidian blades that flash where the light hits.

Wild damsons along the roadside are in flower; the dog and I lift our heads to the almond scent as we walk among sleet-showers and their rainbows. Quinces lift soft-furred leaves and delicate blossoms, surprisingly tough amongst the cold, and the little medlar has leafy flames at the end of each twig. Whenever the temperature gets above 130C, bees come out to forage. The willows are loud with their rummaging traffic among catkins that have blown from silver to pollen-gold in a single day, accomplishing their yearly transformation. And up in the forest canopy, swift parrots! I haven’t seen them for a long time – or rather, heard them. Most sightings are glimpses of movement along the arrowing flightpaths for which they’re named. They’ve come for the bluegum blossom that’s beginning to star a limb here, a limb there, high up. The birds’ conversation showers down, musical, along with a rain of creamy stamens from where they’re feeding.

The swans are back, too, and for the first time, they’ve made a nest – a big platform of rushes and weed in the shallows at the far end of the dam. One of the pair sits, regal, to accept and arrange vegetation gathered and passed by its mate, the movements of each one’s neck and head sinuous and deliberate as an arm and hand in a long black satin glove. A swamp hawk passes overhead and the swans threaten skyward with raised wings, one from the nest, one treading water, reaching and pointing, whistling menace.

Despite the longer days, scimitars of freezing air, whirling storm-blades from the seas off Antarctica, continue to curve up over the island. Each front drags behind it clumped towers of icecloud that loom purple in the sun as they approach, lowering from the northwest, then slice cold rain and stinging sleet across the hillside. We have a night and a day of snow. It falls in showers that don’t settle at this altitude when the ground is so wet, but the ranges to the west are white. 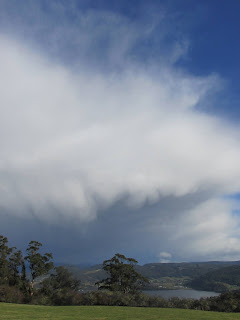 Not long after I arrived here, I had a dream that has stayed with me. In it I am coming home in darkness over the crest of the hill to the farm, having climbed from the valley floor to the east. I stand looking north and west from the hillside above the house, over a sea of mist that fills the valleys and covers the ridges. As I watch, light begins to grow within and through everything, seeming to come from everywhere at once. Inwardly lit, fog rises in gyres, revealing a landscape that is also suffused with brightness. I reach toward a spiral of mist as it lifts, and it falls into my hand as a circle of patterned cloth, heavy, soft, unfinished at its centre. The dream gives me to understand that this is a soul-cloth – it must be looked after carefully because through it, the being connected to it is vulnerable to harm. Full of wonder – at the darkness that brought me home and the light that grew within it, at the fog and its gift – I take the cloth and find a place for it. Later I tell a friend – a woman quite a lot older than me – about what happened and she says sharply, ‘You know that’s witchcraft! You can’t have that thing in the house.’ I’m shocked by the collision between my delight and my friend’s fear. Distress wakes me.

In my twenties when the dream came, I didn’t realise how it was showing me what already belonged in my care – my own soul, a work in progress. And didn’t understand either that I wasn’t asked to choose which response was correct, mine or my friend’s, but simply to stay with some questions: What is a soul? Is soul dangerous? What is danger?

Now more and more I appreciate the fullness of the image I was offered: soul as eddy, soul as movement taking form, condensing from the vortex that follows a swan’s paddling foot, from the twist of birth-blood on a cold wind, from ravens circling. Dangerous and trustworthy as life and the death it holds. In the dream we were both right – my young self, marvelling, and my old friend who knew the trouble I was carrying home. 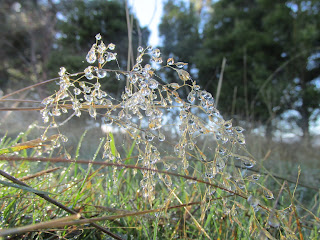