January 31, 2022
I risk to write nonsense these days.
Just write down what you find.
I’ll never know what I’ve found.
John Berger, Here Is Where We Meet 237
New moon at the beginning of the month – a sliver of brightness between clouds in the western sky as summer dusk comes in. As part of the rhythm of things I bring water, flowers, candles to acknowledge the ancestors – those as remote as the stars from which we are all descended, and closer in, those of the ground itself and the creatures on whom we depend, and ranged around the walls, those of my human lineage, whose images soften and lean forward in the moving light. 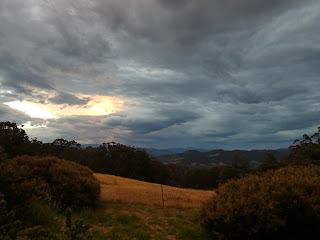 An immense curl of cloud, the remains of a cyclone, drifts down across the island from the Coral Sea. Air turns to steam, mist comes right inside and at night, little frogs congregate on the sweating pavement of the verandah to catch insects attracted to the houselights. When warm damp meets a cold stream from the Southern Ocean, lightning crackles and its thunder booms up and down the valley. Thinking about this meeting, how worlds interact.
And I’m thinking still, again, about how we meet our dead, how we live out the reverberations of their presences in our lives, as I re-read John Berger’s Here Is Where We Meet. In it the narrator continues conversations, as one does, with those who have died and who live on with us through experienced intensities of nurture, of gift and refusal, companionship, need, attraction, repulsion, whether forged in bodily presence or in heartmind only. He speaks to his mother, and to friends who have died and others he never met but whose thoughts and actions touched him deeply. There’s freedom in these encounters, unconstrained by patterns that grip us in life – encounters where relationships can continue to develop.
For several weeks, bronze beetles are everywhere, little metallic orange-brown scarabs that crowd, some years, on the face of every flower to feed and mate, and burrow if they can into the hearts of the blooms to sleep and hide. It’s the time of year when brown tree frogs climb to vantage points on the leaves of tall-growing plants to wait for passing insects and happily stuff in a scratchy mouthful of beetle when they get a chance. Quoll droppings around the garden glitter with fragments of wing-casings. The beetles lay their eggs among the grass roots where their fat white larvae can feed and where they are fed on in turn by bandicoots and birds and the pale narrow centipedes and other predators that live in the soil. 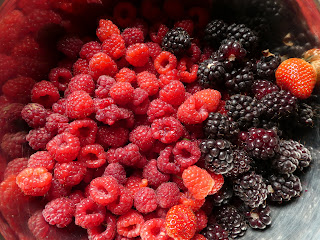 Summer-cropping raspberries from the half dozen canes T planted in the netted garden come quickly to abundance and just as quickly finish, as autumn-cropping canes planted elsewhere start to flower. Boysenberries are ripe – my mother’s favourite – big black fruit of multigenerational crosses between European and American blackberries and dewberries and raspberries. But this cloudy year neither raspberries nor boysenberries nor the few cherries that set have properly sweetened. For that, more sun is needed. Still we gather them, delighted; friends make summer pudding, so wonderfully more than the sum of its soggy-sounding parts – slices of bread arranged in a bowl and piled with sugared berries under a weighted lid of more bread, so that the juice runs and soaks in. We eat it with cream and come home and make it again.
But into this quiet at midmonth erupts an undersea volcano in Tonga, and many islands of the archipelago are partly or completely inundated by tsunami that follow. A shockwave ripples out around the world and its sound is audible as far away as Alaska. When it reaches us, I hear what seems like diffuse thunder and the dog leaps up from where she’s lying and looks around, but when I check the weather radar, no storms show up. Then I hear the news.
Tidal waves roll outwards to Aotearoa New Zealand and all the Pacific islands, and to South America, California, Japan and down along the eastern seaboard of Australia to reach us even here on the shores of the Tasman. The volcano is one of a chain along the trench and subduction zone that runs around the Pacific rim; its eruption comprises molten rock in which gas is dissolved under immense pressure deep inside the earth. As it rises to the surface where pressure is released, the magma froths like sparkling wine when the cork is popped. Adding to the power of this blast, the hot liquid meets seawater, and the resulting column of super-heated steam and ash rises 55 kilometres. Tracking equipment records the radio waves generated by 200,000 lightning discharges within the cloud in the first hour and nearly 400,000 over the course of the eruption as fire and earth and air and water violently combine. 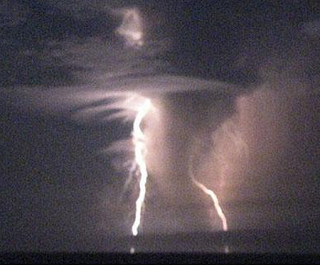 Image: Shane Egan, Tonga Geological Services (ens-newswire.com)
Full moon comes and again I speak formally, bring gifts in recognition of the dead. How are they present to me; how am I present to them?
Still reading Here Is Where We Meet as I think about these questions – a chapter that describes a visit to Chauvet Cave in the limestone country of the Ardèche in southern France. On the walls of the cave are images drawn and incised and painted in charcoal and red ochre, of lion, bear, mammoth, aurochs, bison, horse, deer, hyena, rhinoceros, ibex, and of winged creatures including an owl that looks back over its shoulder at the viewer. There is also what is thought to be a depiction of one of the volcanoes known to have been erupting in the area at the time – 36,500 years ago as determined by the most recent radiocarbon dating of the images in 2020.
The paintings were made by a nomadic people who didn’t live in the cave but visited its recesses deep beyond the reach of daylight to make their art. Berger wonders about how the artists imagined time and absence and death and if, for a people on the move, some concepts that are now commonly articulated as dualities – past and future, life and death – might have been experienced as coexisting realities – here and elsewhere, visible and hidden. Speaking with one of the book’s interlocutors, Anne, (who is indeed elsewhere – in another country, in memory, dying), Berger’s narrator says of the animal images:
Those rock paintings were made as they were, so that they might exist in the dark. They
are for the dark.
…
What they painted is like a map, Anne says.
Of what?
The company in the dark. (Berger, Here Is Where We Meet 141–42) 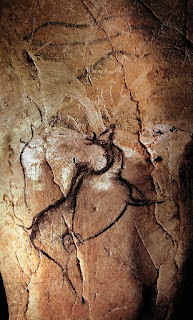 Image: Dominique Genty https://doi.org/10.1371/journal.pone.0146621
The cygnets on the dam are now two-thirds the size of their parents and have exchanged their silver down for brown juvenile feathers. Surrounded by ducks and grebes and coots and the occasional cormorant, all of whom are once again tolerated rather than chased away now that nesting season is over, the adults practise flight. The young swans watch, and they too lift their wings and stretch as-yet untried muscles, in which nevertheless an elsewhere has begun to flicker.
Carrying these thoughts and sensations, I join what is for me a predawn video call, with a group of others who are mostly in their midday in the northern hemisphere. Taking my place among the rows of daylit faces, I see my features emerge from darkness, gathering light as it begins through the window beside me, the way photographs of the ancestors draw candlelight. My white hair shines.
How am I with the lifegiving, deathdealing, breathsharing dead? I am their dark and they are within me, inscribed all though, dissolved all through like gases – together we build a charge, erupt, crack and boom, build new land and sink and rise again, ancestor volcanoes strung out along a meeting place of worlds, their images a map of the company that keeps me as I make my way in this haunted blessed cursed enchanted world.
References
John Berger. Here Is Where We Meet. London: Bloomsbury, 2006.
Nomade, Sébastien, Dominique Genty, Romain Sasco, Vincent Scao, Valérie Féruglio,
Dominique Baffier, Hervé Guillou, Camille Bourdier, Hélène Valladas, Edouard Reigner,
Evelyne Debard, Jean-François Pastre and Jean-Michel Geneste. ‘A 36,000-Year-Old
Volcanic Eruption Depicted in the Chauvet-Pont d’Arc Cave (Ardèche, France)?’ Plos One
8 January 2016. https://doi.org/10.1371/journal.pone.0146621
Turney, Chris, Alan Hogg, Paula J. Reimer and Tim Heaton. ‘From Cave Art to Climate Chaos:
How a New Carbon Dating Timeline Is Changing Our View of History.’ Phys.org 13 August
2020.
‘Undersea Volcano Erupts in Tonga, Triggering Pacific Tsunami.’ (ens-newswire.com)
Environment News Service 15 January 2022.