Dark days, cold and wet with sleet and snow, carried on winds that blow from the south for weeks as a high pressure system sits to the west, blocking the movement of fronts that could shift the airflow. Every morning at daylight, every evening on dusk as the moon wanes, the whole turbulent bowl of the sky fluoresces as if backlit pink and yellow from horizon to horizon. In and against this light, clouds tumble grey and purple, deepening. 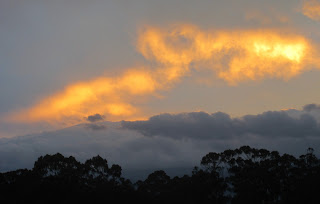 In the autumn, J brought home a hen and her chicks from the farm of a friend where they were wandering, at risk of attack by dogs and hawks. Now the chicks are grown and from four in the morning until dark, in the henhouse and out in the paddocks eight roosters crow and fight one another. H comes with his properly sharpened knives to help us kill some of them.

We keep the birds quiet, and they’re calm when the moment comes to cleanly and quickly cut their heads from their necks. After a few minutes, we dip the bodies in hot water to loosen the feathers then pluck them, before making a cut in the abdomen and reaching in to take out the intestines. The blood is offered back to the ground, and the guts and feathers too by the slower way of the compost heap. I keep the hearts and livers and we fry and eat them straight away; the feet and necks and crops (after they’re split and the little grinding-stones are washed out) will be added to the stock pot for soup that is delicious and cures many ills.

I cut one bird in pieces and cook it for the evening meal, with onion and garlic and carrot and freshly ground spices – cardamom, cinnamon, pepper, cumin, cloves, nutmeg – and some of the tomato passata I preserved in summer. The smell and taste of the food is wonderful and we eat with full gratitude. I think of the crowd of ancestors for whom these actions, this rite of killing and cooking and sharing food would have been among the necessities and joys of life.

In the damp, all things that love water continue to thrive. The grass is still growing despite the cold; fresh shoots form on the eucalypts and already the wattle buds are brightening. Fungi of all kinds continue to sprout, ever more elaborately – baskets and corals and earth stars and (new to us), growing from the base of a stringybark root burl, a row of toothed jelly mushrooms – Pseudohydnum gelatinosum – pearl-grey, translucent, with velvety brown tops and tiny protrusions on the undersides – teeth instead of gills or pores. They’re common all over the world – how did that happen? And edible, though bland. 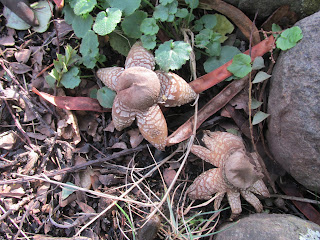 When the weather starts to move again, still it rains in waves from the southwest, and eagles come to play, hanging high and sliding crossways in the wind that announces each front. Momentary sun spins yellow in the remaining leaves on the silver birches near the house, while each gust brings down more so that the air is filled, the grass is strewn with gold. In the stillness between squalls the river, old silver, practises its reflection work, offering back a slash of last red leaves, dark portals of forest and swathes of bright pasture at its edges, smoke trails from bonfire heaps that can at last be safely lit.

And the solstice comes. Tree frogs krik kriiik kriik ahead of each rainstorm from their hidden places around the garden. Bandicoots dig over the soaked ground. Wind draws from the sea and blows the rain away for an hour, knocking droplets from the grass and combing it all one way, though in sheltered places everything stays drenched. The sun comes out, low and bright, and from the clear sky falls a night of frost, droplets frozen solid, black ice on the roads.

Before dawn, almost invisible on the brightening horizon the old moon, pared to a fingernail, rises with Mercury beside it, and above them Venus rides near the Seven Sisters – Matariki – who appear once more in the morning sky to signal a new season. T plants out garlic cloves for harvest in the summer and sows seeds of spring crops. A honeyeater begins to gather fine twigs for its nest.

Returning from a walk the dog barks, urgent, imperious, from the other side of the door and I understand that I can come in – to the world as it calls, each knock the boom of a traveller’s staff in the darkness, the cold. Alive or dead, already in the web that entangles the ground and its tiny lifeways with the rooster who scratches there and with us as we kill and eat and return to the earth ourselves in time – soon! A great host coming and going, how we throng the ways.

I dream that the beloved dead come to meet me, and that they are well. Dark or bright, words and presences here or gone – I’m not saying! 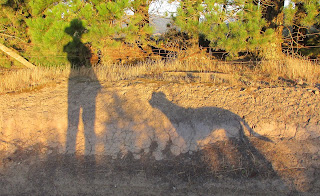