Lamps of the wattles slowly brighten, lengthening the days. And a grey robin calls from the hawthorn hedge, quiet, clear, heart-piercing – the sound of the beginning of the end of winter through every year of my life here, early on when I didn’t know who I was hearing, then catching first glimpses, then close by; and after that, even out of sight the birds were with me.

Cold light; snow-patched mountains against a white sky. But tiny green hands appear on the tips of the elder twigs, and in them the buds of flowers to come. Russet sheaths of willow catkins shine with resin, swelling. For weeks now, since the shortest day, the young hens have been laying small beautiful eggs, chalk white and fawn-coloured and dark brown.

Southerly storms continue, and their winds bring wild seas and weed heaped on beaches, even those inside the shelter of the islands and peninsulas that define the coastline here. The weed is there one day, gone the next – eelgrass from estuarine shallows, golden-brown bladderwrack and red featherweed and a multitude of other kinds – strappy and hairy and bobbled algae from inshore reefs, green candelabra of velvetweed still attached to mussel shells and pebbles. And entangled in it here and there, pieces of plastic – strands of rope and broken floats from fish farms, bits of takeaway containers.

On a cold day I sit with a pile of mending – torn clothing, rips in the cloth I throw over furniture to keep off dog hair and the dirt of work clothes. I’m using a sewing machine given into my care after the death of my friend’s mother, M. It’s a pale blue Singer from the 1960s, still reliable after a lifetime of making and mending; just as I learned from my mother, perhaps M learned from hers the careful work of choosing a pattern and fabric, of cutting out the pieces – clothes for the children, small dresses and shirts and pants quickly outgrown, a formal gown for a teenaged daughter, clothes for herself and her husband once the children were gone. When I take off the cover for the first time, I see that it’s still threaded and set to zigzag stitch – and so I continue the mending that was surely its last task before it came to me. 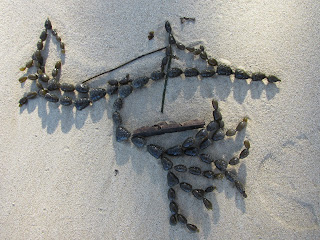 After the latest storm, a clear cold night and frost right down to the beach. Sand and seaweed are rimed with ice that glitters in stripes of sunlight and shadows of trees that line the bay. The sea is calm, the wash and hush of wavelets so quiet I can hear the calls of spinebills feeding in the flowering heath on the hillside behind me. Only the piles of weed tell the story of weather that’s passed over.

Thinking about my maternal grandmother’s line – West Cork people who, before famine drove them ashore, lived, according to various family stories, on Bere Island and Whiddy Island in Bantry Bay, and further south and west around the coast, on Sherkin Island. There, seaweed loosened by winter storms was a godsend, riches gathered eagerly, wading into the freezing swell to drag it ashore before it disappeared. Some kinds were eaten, greatly nourishing for children and the sick or elderly, other kinds were heaped to make soil for gardens. Bitter disagreements fuelled by ‘spite feamainne’ – seaweed spite – broke out over rights to harvest, among the intertwining strands of neighbouring families. Bíodh an fheamainn aige. My grandmother’s father died at thirty, having been born at the height of the famine; my grandmother and her siblings came with their mother to Aotearoa New Zealand, where they found work as seamstresses.

I go with R on the ferry to lunawanna-allonah – two rocky islands running north-south just off the coast, joined by a sandy isthmus; when I long for the sound and sight and smell of the open sea that’s where I go, to the cliff walks and banked dunes of its eastern coastline, facing out into the reaches of the Tasman. There I can see ships come and go over the curve of the world towards the string of islands where I was born, where my sisters and their children and grandchildren live.

We decide to walk the ocean beach of the isthmus, with its high dunes where penguins and shearwaters burrow to make their nests. Since I was last on the island, storm-surges have gouged the faces of the dunes to crumbling sand-cliffs, and at their feet, interlocking tangles of small driftwood from the banksias and other coastal vegetation washed out of the dunes.

Not much weed on the shore, but at long intervals down near the waterline, the holdfast and thick stem of a strand of giant kelp, its leathery blades so wide and strong that palawa people shape containers from them. When I first arrived here forty years ago, this kelp formed dense forests all along the coast, but now in many places these ecosystems have vanished, stressed by warmer, nutrient-poor seas as the east Australian current extends its reach southwards. Where the kelp grew there are sea urchin barrens – expanses of bare rock where the urchins eat everything that grows. The biggest rock lobsters – the ones that ate the urchins and kept their numbers in check – have been fished out.

The world, vast soul, our ancestor, rolls on its trajectory among the stars who gave it birth, and we are its calls and cries, its songs and mutterings and billennia-long ruminations, all of us – the ground that rises up as grass and the wallaby grazing there; the rooster who crows and claps his wings nine times just after midnight, waking me from a dream of entanglement; the hunting quoll who calls forth the rooster’s challenge; the humpback whales that pass singing along the coast from and to their feeding and birthing grounds, and their young one who uttered herself in death onto the beach; the heaped weed knotted with macroplastics and microplastics that surely contributed to her dying, and the bacteria that dissolve the knot, learning to eat the plastic. The mending, the work of damage and repair goes on, skills of destruction and healing found and lost and found again – curses and prayers and blessings woven through the air, the water, the earth and fire of this life.